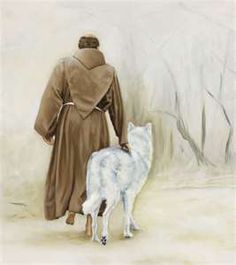 A Prayer Attributed to St. Francis:

My friends, this morning I must admit, I have a lot of mixed emotions.  A lot of mixed emotions that have made today rather uncomfortable.  I am feeling rather weary and heavy-laden.  When I originally read today’s texts, especially our Psalm, I was overjoyed.  I was overjoyed knowing that this would be my first feast of St. Francis on the Lake.  I was excited to preach on the glory of God’s creation.  I was excited to preach on our role as stewards of this creation.  I was excited to preach on the power of God incarnate in every aspect of the world around us.  I was overjoyed because I would have the opportunity not only to draw on the writings of Francis and Clare, but of the Celtic Christians, and even of John Muir as he compares the glistening caps of the Sierra Nevada Mountains to the bejeweled city of the heavenly Jerusalem.  I was overjoyed to bless my pup, Merlin for the first time and to bless all these beautiful and lively members of your own families on this celebratory day.

But friends, I have to admit, this morning this joy is mixed with something else.  This joy is mixed with grief, with sorrow, with anger even.  My joy is muted by the events that occurred late last weekend, by the tragedy that touched our state, by the shootings that happened in the city of Las Vegas.  And for a second I thought about not even mentioning Francis at all in my sermon.  But thank God as I griped about my dilemma earlier this week, a friend reminded me of one of my favorites stories about this saint from Assisi, that wandering monk of the 12th and 13th centuries; preaching and teaching throughout central Italy.  It is a story that I believe both reflects Francis’ love of creation and his peace making capabilities.

In the hills of Umbria, Italy, covered in green and sun kissed with Mediterranean light, sits the small medieval town of Gubbio (less than an hour’s drive from the pilgrimage center of Assisi).  However, during Francis’ day this beautiful city of Gubbio—sitting so quaint and picturesque in a valley encircled by hills—was in desperate need of help.  For this quiet town was terrorized by a wolf.  Under the cover of night he visited their village.  At first he solely devoured the sheep and goats of the townspeople but soon he graduated to dining on the townspeople themselves; picking them off one by one by one.  Having such an insatiable hunger, no prey small or large could curb the wolf’s appetite.  And the townspeople of Gubbio continued to be harassed by this wolf, and they knew of no other alternative than to kill the beast who prowled around at their doors.  So soon the villagers armed themselves with pitchforks and swords, with clubs and canes, ready for yet another attack from the vicious wolf; ready to put an end to the animal terrorizing their town.  Feeling so much fear and hatred for their fellow creature of God.

Yet thankfully this was not to be the end of this animal.  For Francis, the dog lover that he was, knew he had to intervene in order to save the lives of both the townspeople and the wolf.  So this holy man went out from the village of Gubbio, out into the hills to find the den of the beast.  And after Francis spoke with the creature (as he had a habit of doing with all of God’s creatures), he brought the wolf back to Gubbio not as a foe but as a friend.  A friend who was also hurting; whose hunger ate away in his belly as a drought was in the valley that year, and hunting was much leaner than it ever had been.  And God wouldn’t want this beloved creature to suffer anymore than God would want any of God’s beloved children to suffer.

So this Christian community banded together in the midst of all their mixed emotions, of fear and uncertainty, of anger and hatred.  In the midst of the uncomfortable reality of confronting the wolf, the people of Gubbio actually banded together as a community to feed this creature of God for the rest of his life; to care for this animal until his dying day; to transform this wolf from foe to friend with the simple choice of love.

At first the people of Gubbio, these disciples of Christ, may have thought they only had two options: either they had the opportunity to repay hatred with more hatred, blood with more blood, violence with more violence.  Or the option to do nothing: to sit idly by as fellow children of God were massacred; to claim complacency because their family was not affected; to respond that now is not the time to talk about the issue and just ignore the agonizing pain in their midst.

But thank God for the wolf, and for us, they chose a third way.

My friends, in the wake of such a tragedy in our own state, in the aftermath of such a massacre, as the wolf prowls around about our door we too have a choice to make.  As Christians the kind of love God calls us to; the kind of love modeled by St. Francis; that kind of love is never complacent, is never passive, is never inactive.

As Christians God calls us to choose an option behind door number three.  An option that does not abuse these mixed emotions, that does not manipulate anger and grief for evil purposes or pushes them aside encouraging a culture of denial.  A culture of denial that continues to allow children to be gunned down in Colorado and Connecticut; that continues to allow families to be massacred who just wanted to see a movie; that continues to allow people who are out enjoying a club or a concert to be targeted and killed as they went about enjoying their lives cut so short.  But instead God gives us a third option, as modeled in the life of Jesus Christ.  An option that uses anger and grief, crying out from the depths of our souls, to save the soul of another human being; to say we will have no more part in it; to swear that this will be the last time we see such violence in our midst.

2 thoughts on “The Wolf Prowling at Our Door”

Snuck this photo in during our celebration last night. Happy 16th birthday, Samwise!! I am so proud of the man you are becoming: your continued curiosity, your heart for service, and your always appreciated and unexpected humor.